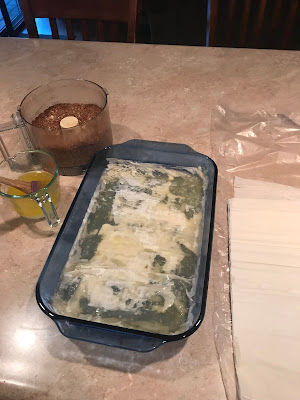 Last week was the annual Clark County Master Gardener Volunteer Appreciation Night. That's quite the title, isn't it? I haven't always been able to attend the volunteer appreciation event, but this year we happened to be home, so I was excited to go. I have been a volunteer Master Gardener in my county since 2011, and this last year I reached a total of 500 service hours as a Master Gardener!
As part of the event, we were asked to bring a dessert to share. Each attendee would get to cast three votes (we were given three beans each) for their favorite desserts of the evening. I had asked my husband which dessert I should bring for the contest. After much debate on our morning walk -- a pie or a crisp or my favorite chocolate chip cookies -- his final and ultimate suggestion was baklava. This is a dessert that I have made most Easters for the last ten years or so. I came across the recipe in a Sunset magazine in 2006. It is not one I would have thought to bring, because I typically only associate it with Easter. His reasoning was that it would be different enough to stand out. As usual, he ended up being right! This baklava recipe, from a 2006 Sunset magazine, landed itself in third place for the evening. It was beat out by a blueberry-rhubarb custard and some homemade eclairs. 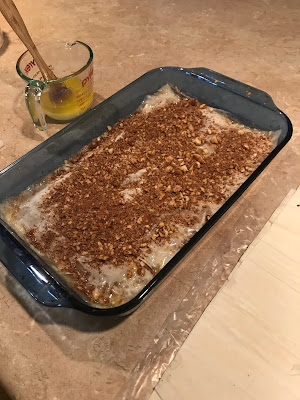 It's a relatively simple recipe to make. You pulse together in a food processor almonds, walnuts, sugar and cinnamon. Melt a cup of butter, have a thawed package of filo dough at hand, and you are ready to assemble the dessert. Once you layered these all according to the recipe, you use a knife to cut your squares or diamonds and slide the dessert into the oven to bake. While the baklava is baking, you combine sugar, water, honey and a cinnamon stick in a saucepan and heat to make a simple syrup. This syrup gets poured over the baked baklava. The whole dish is allowed to sit for a few hours (or overnight). It's as simple as that! 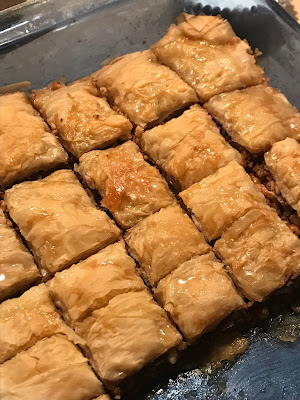 I placed individual pieces of baklava in paper cupcake liners, so that they were easier to serve at the dessert table. Really the only thing missing was a strong cup of coffee to go with these treats! If you haven't made baklava before, I encourage you to give it a try! It's a simple dessert to assemble that tastes like it took more effort than you really put into it. And who knows, it might earn you accolades with those you serve it to!