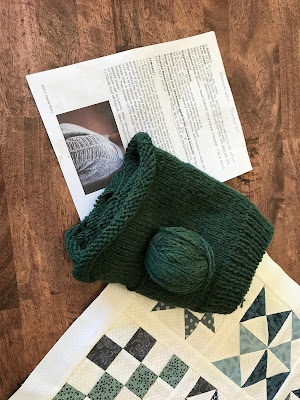 Have you ever been working on a project and knew something was off? That was the case with this sweater I began a couple months ago. Every time I picked it up to work on it, it felt like it was going to be too large. Even though I had made a swatch and adjusted my needle size accordingly. So this week I took what I had made of the sweater and 'tried it on'. I could see that it had far more than the 10" of positive ease that the pattern said it would have and something would have to be done to correct it. If I kept working on it, the finished product would have been a tent on me! 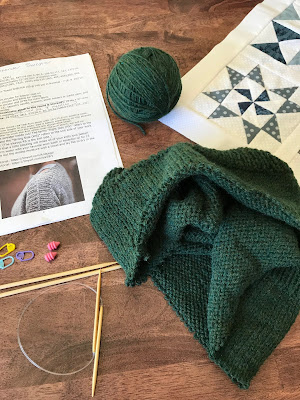 I knew the project would need to be pulled apart and reworked, but I wasn't sure what corrections needed to be made. Did I need to knit the smaller size? Or, did I need to go down a size or two in needles? I took a trip down to our local yarn shop, Blizzard Yarn and Fiber to ask for help. I am so glad I did. The women there were able to look at the work I had began, look at the pattern, take some measurements and point me in the direction. Yes, it involved pulling out all of the work I had begun. But that's how we learn sometimes, right? It was recommended that I move down a size in the pattern as well as trying a new swatch on a smaller needle. It turns out I keep a pretty loose tension when I knit. 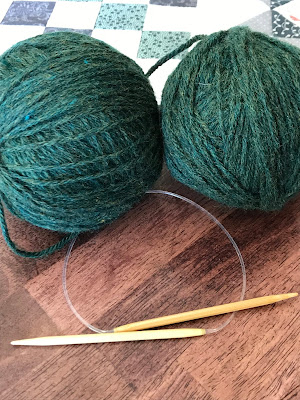 It took less than ten minutes to unknit my sweater, and now I am back at square one. So this month's post of my knitting shows me no closer to finishing a project. It is actually quite the opposite.

I did however finish a couple of good books this month!

I listened to the book "Sold on a Monday" by Kristina McMorris. It was an interesting listen. The story is set in the early 1930s and follows a newspaper reporter who takes a photo of two children sitting next to a sign stating that the children are for sale. The photo gets published and brings attention to the reporter. When the reporter finds out what happened to the children after the picture was published, he ultimately feels responsible and sets out to make things right. The novel, which is entirely fictional, is based on a similar photo taken in the 1940s.

The second book I read was a memoir written by an Oregon author. The book "Cabin Fever: Notes from a Part-Time Pioneer" follows author William Sullivan and his family as they build a rustic cabin using no power tools in the late 1970s. They then proceed to spend the next twenty five summers at the cabin. This cabin has no running water, no electricity, and no roads heading in to it. Along with living at the cabin each summer, the Sullivans attempt to find out what happened to the old homesteader who had previously owned the land. Local legend was that he had been murdered. I loved reading this book, and it is one that I would pick up and read again. I had stumbled across it when our family was visiting a small historical museum on a road trip a few years back. I enjoy finding new, local authors to read by looking through the books offered for sale at historical museums. I have yet to be disappointed.

Linking up with Ginny's Yarn Along for May!
at May 02, 2019
Labels: Knitting, Reading